See our previous post on the 6 Important EAS reactions to know for the DAT.

Now we need to focus on benzene substituents and how they affect the location of subsequent additions. Here’s a list of the ones you would most likely see: 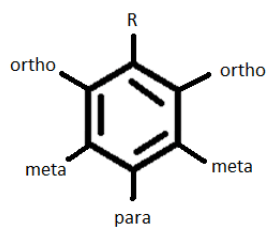 Therefore, depending on the character of the initial substituent (R), a subsequent substituent would be placed at the ortho or para position if R is an activator/halogen or at the meta position if it is a deactivator (but not a halogen).

Other facts to know: