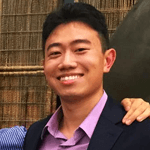 Meet Jonathan Tai, a happy DAT Bootcamp customer who recently conquered the DAT. I’ve asked Jonathan to share his DAT experience with us as the featured student of February.

I have a couple strategies that were essential to my success. First, have a schedule of how you will study and stay disciplined. If possible, find someone who can hold you accountable. I used Ari’s Study Guide as a jumping off point for deciding how I wanted to learn and practice the material. Having a schedule to follow helped ensure that I achieved my goal. I decided to dedicate part of my summer to studying and opted to stay here at Hopkins because I knew that many of my friends were studying for the MCAT and DAT during the same time. We all agreed in the first week to study in 3 hour chunks during the day that were broken up by lunch, gym time to clear our heads, and dinners that we would take together. This helped us all be successful on our exams because we held each other accountable to our study schedules and also provided a support network for if we were having bad studying days. There will be rough days but the important thing is getting yourself to study fresh with energy again the next day and having friends around you who are watching out for you always makes it easier.

Second, when you’re learning the material, don’t worry about the score, but instead, focus on whether or not you understand the tested material. I didn’t even consider what I wanted to be my target score until after I had taken my first full length Bootcamp test two weeks before my exam and I used that as my standard. For me at least, thinking about the score I want from the very beginning adds unnecessary stress and would color my thinking when I was reviewing. By that I mean if I had guessed something right and had been worrying about the overall score, I would tell myself that I probably would’ve guessed that on the real test and I’d just gloss over the question instead of actually understanding it. Or worse, if I didn’t get a score I wanted, my mind would jump to conclusions and start thinking that I wouldn’t be able to get into a dental school and that all my hard work would go to waste creating unrealistic panic. Not worrying about the score meant that if I didn’t get a score I wanted on a set of practice questions, I wouldn’t be dissuaded, I would just view it as an opportunity to learn more. Even if I guessed an answer correctly or I was 75% certain about an answer I picked, I always reviewed that question and marked it to note in the future.

Third is to study like you test. State-Dependent Learning is critical for any exam like the DAT where you are being asked to learn and memorize a ton of information and be able to consistently and accurately recall it during a 4.5 hour exam. Like I said, this meant that while I was learning and practicing the material, I would break my day into 3 hour chunks where I would avoid touching my phone or social media so that even from day 1, I was building up my testing endurance. When it came time to take the full length tests, I planned out my day as if it were my real testing day. I would wake up early, eat the exact breakfast I planned on having, make and pack the snacks I would bring for the test break to eat as lunch, wait until the time of my exam (10am for me) to start even if I got to the library by 9am, and refrain from drinking water or going to the bathroom until the break because I knew it would be tough to do so during the real test. While this was definitely not easy to do, it helped me better understand what I needed to do on test day (for example, I started waking up earlier to make sure that by 10am, I was fully awake and eating bigger breakfasts because I found that I would be pretty hungry during the PAT section otherwise) and it also ensured that on test day, I wasn’t worried about any little thing throwing me off my game because I had prepped for these variables and thus I could just focus on showing that I knew the material I had learned.

Fourth, and most importantly: Remember this is just a test and you are capable of conquering it. No matter what this test may mean to you, at the end of the day it’s just another test. You’ve taken plenty of exams in your life and there’s no reason this one should be different from any test you’ve crushed before. It focuses more on memorization and thinking quickly, but I actually think that works to your advantage as a tester because it means that there is limited room for critical analysis and interpretation and if you set aside the time and energy to learn the information, no question can stop you. It’s hard work but well worth it in the end.

I made sure to do all the practice tests for Bio, Orgo, Chem, and QR on DAT Bootcamp and review any question I had marked before I got to the full length tests. The explanations that Bootcamp provided were invaluable in this process. They were very helpful in understanding the general concepts tested and why other answer choices were incorrect. After reading through them or watching the provided video, I would have no doubt as to what the answer was. I had a separate notebook where I would write down any question I had marked or gotten wrong. I wasn’t copying down the question but instead writing about the tested concept in a general way to review what type of question it was and how to best tackle it or think about it if a similar question were to come up on my exam. This was essential because while Bootcamp tests are similar to the real thing, the exact questions you see on Bootcamp will not come up on your real exam so just memorizing answers will do no good here. This was important to recognize because the full length test questions are sourced from the same test bank as the practice problems so it would be easy to just subconsciously remember all the answers and spit them back out, but that wouldn’t actually help you learn. Instead when I did the full length tests, I took the time to try to look at each problem like a new problem and go through the full process of eliminating other answer choices and checking my work. If you can generally understand the tested concepts, you can walk confidently into your exam because there are only so many types of questions you can be asked on the DAT and you’ll know that you’ve seen them all before. Looking back the one thing I would have added would have been to study more QR and PAT.

The QR on the real DAT ended up feeling just like a Bootcamp test and studying more math could have gone a long way to improving my score since I didn’t start studying math until the last weeks of studying so I really crammed it into my schedule. I didn’t really look at PAT except for on the full length exams because that was luckily my strongest subject when I first started studying but I never really figured out how to do angles and Bootcamp does a fantastic job of giving you an endless amount of problems with the generators so playing with the Angle Generator may have done a lot for me.

My freshman year of college, I got a B- in an advanced Chem course and a B and C+ in Orgo 1 and 2 respectively due to a slow adjustment period and some personal issues that I only later resolved. While my grades have improved dramatically since then, I’ve always had a shadow of doubt in my own personal abilities. For a long time, I honestly didn’t believe that I could be successful. But I saw the DAT as my opportunity to prove to dental schools that I was far more capable than my grades suggested and that even more importantly, that I was capable of anything that I worked for. I did not let my previous grades discourage me but instead used them as my motivation to really start from the bottom and relearn the chemistries as if I had never seen them before. Building a more solid foundation with resources like Chad’s videos and the Bootcamp explanations, I compiled a binder full of notes on every unit and type of problem that I encountered so that by the time I took the test, I actually felt like I really understood Chem and Orgo. In my prerequisite courses, I was praying for certain types of questions to show up on the test because I really didn’t understand it as well as I should’ve. When I took the DAT, I knew that I was ready for anything. I finished with a 25 TS with Orgo and Chem being my two highest scores that day. I know there are many out there who are in my shoes and have struggled in school early on. To those people, I would say always keep your head up and don’t linger on your previous mistakes. Remind yourself that you are capable of success because anyone can beat this test with hard work, the right resources, and a positive mindset.

Get a better DAT score 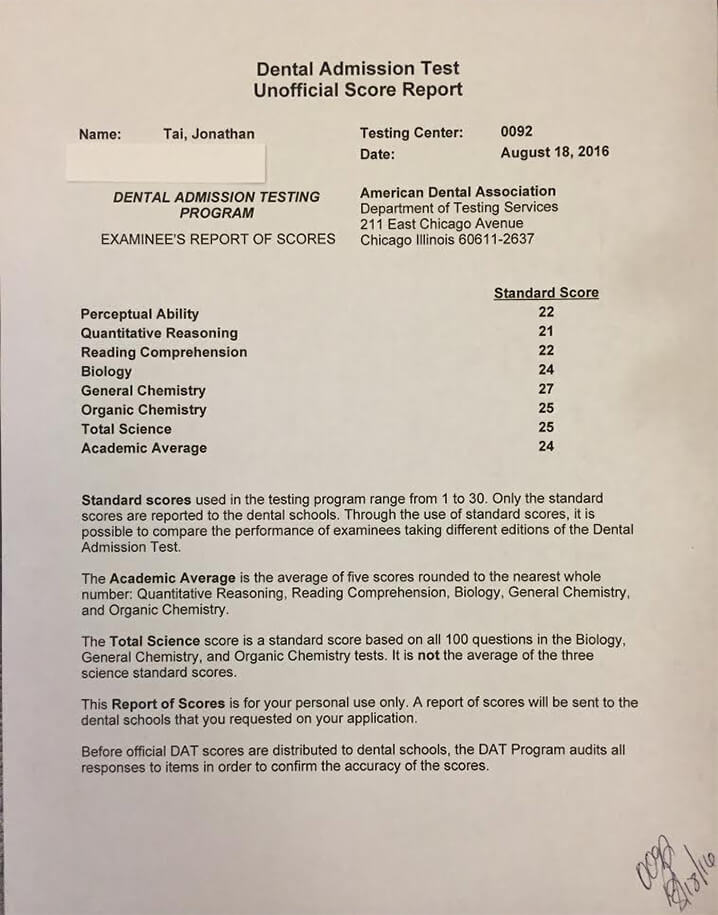